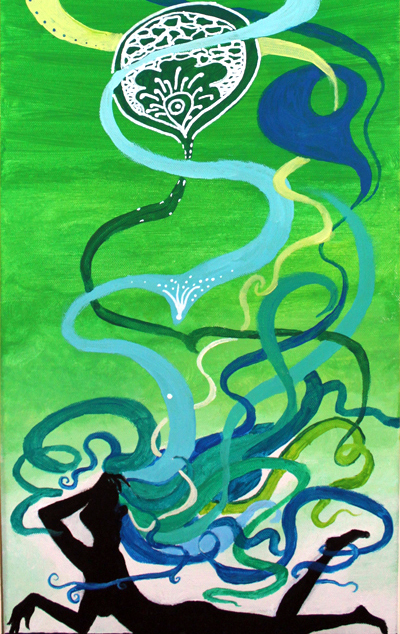 There’s power in stories. That’s all history is: the best tales. The ones that last. Might as well be mine.

This quote from the game formulates the quintessence and the main intention of DAII : telling a story! During the whole game I was able to feel the complexity and creativity how this had been realized. For this reason, the questions of this paper are:

1. How had BioWare created the story within DAII?

2. How does this effect the game play and the player’s experience?

My questions imply one of the main discussions of today’s game studies: Can a game work out as a narration? Or are games and narrative oppositional medias that can not be mixed? As a consequence of the controversy between ludology and narratology, one could not apply the methods of one field on a work of the other.

For this reason I will include some practical aspects of this theoretical discussion, because my hypothesis is: DAII is designed as a game that plays with this dichotomy. It applies the qualities and techniques of narration and breaks the border between game and narration. Further the questions whether DAII can integrate narrative elements or even „synthesise“ narration and game successfully will be answered in my final conclusion.

I will use analytic tools of both fields: The first question throws me directly into the field of narratology. My narrative analysis will combine the methods of (video) game narrative theory and of literary narratology. I will analyze the discourse levels of narrative structure (chapter 2.1), mediation (chapter 2.2), temporality (chapter 2.3), and space (chapter 2.4). And conclude the effects on the players experience basing on the following functional manifestations of narration in games:

1. the narrative script which is designed into the game

2. the narrative that players write though their actions, actualizing a particular sequence of events within the range of possibilities offered by the built-in script

3. the narrative that lures players into the game (cut scenes and background information that introduce the game; text on the box)

4. the narrative that rewards the player (cut scenes that follow the successful completion of a mission)

The second question is connected to a specific characteristic of the medium: the interactivity. Here I will analyze the linearity or possibility of variation of the plot, structure and endings, the interaction of the avatar (with characters, quests, and so on) in focus on the manipulation of the story line and the restriction of rules and design. For this analysis I will use the methods of game theory and design and the results of the first chapter as a basis.

If you are interested in this paper leave a comment and I will send it on your email adress.